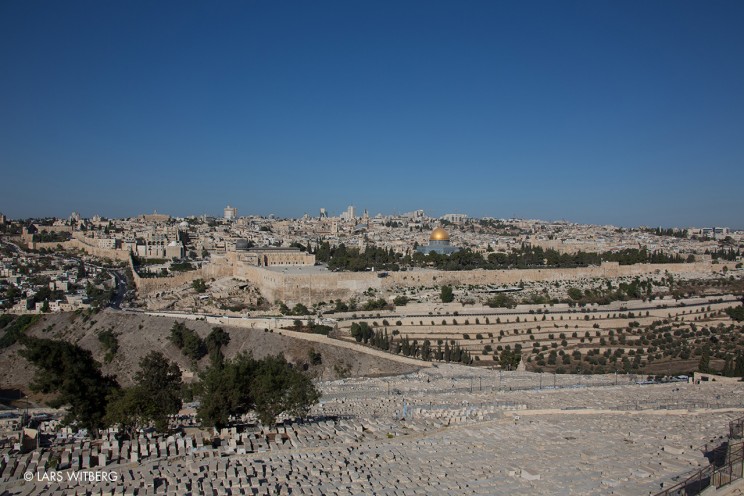 We are standing below Mount Olive overlooking the Kidron Valley, on the east side of Old Jerusalem. In the distance we se the large golden dome on Temple Mount, known to the Muslims as Haram esh-Sharif meaning the Mount of the house of god. This hill is part of the Old City of Jerusalem and is one of the most important religious sites in the world. It has been a holy site for thousands of years by Judaism, Christianity, and Islam.

The Kidron Valley has been an important site for events in biblical history. In the Old Testament King David crossed the valley to escape his wicked son Absalom. 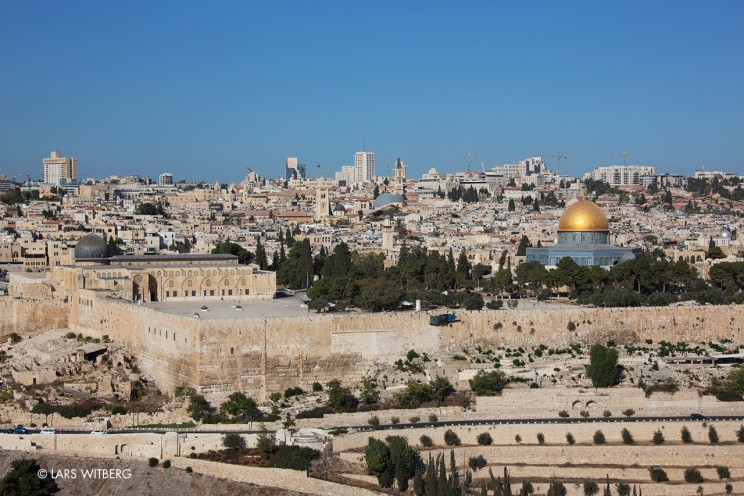 In the New Testament Jesus travelled from Jerusalem to Bethany through the Kidron Valley to visit Lazarus and raise him from the dead. He also rode a donkey from the Mount of Olives through the Kidron Valley and in through the golden gate during his triumphal entry. In the pictures you can see the Golden Gate known as the Eastern Gate as a closed gate in the wall. The Eastern Gate is one of eight gates built into the walls which surround the Temple Mount. The Eastern Gate provides the only entrance from the East, and it faces the Mount of Olives. Over 2,600 years ago, the Lord declared the Eastern Gate would be shut and would remain closed until the Messiah arrived to open it. 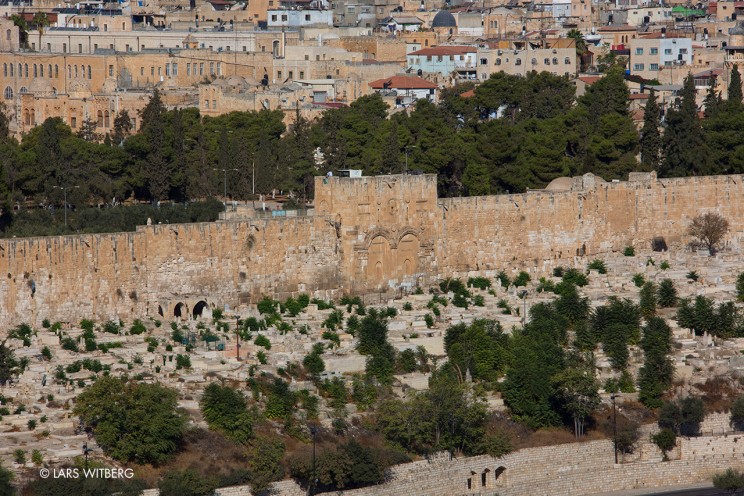 “So when Messiah returns to earth through fire and lightning, his feet will touch down on the Mount of Olives where he left this world, the gate will open, he will bring the dead back to life and walk with them through the golden gate”. Prophesies like this makes this area below the Mount of Olives the most popular place to be buried. Close to the site where Messiah will return. As you can see there is graves everywhere. 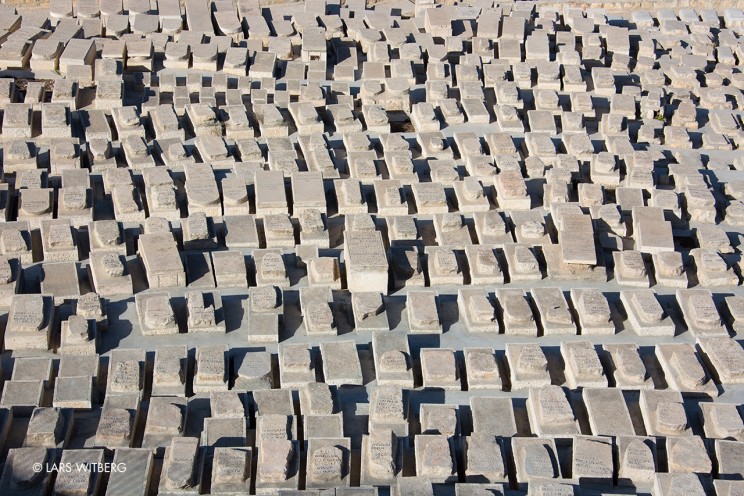 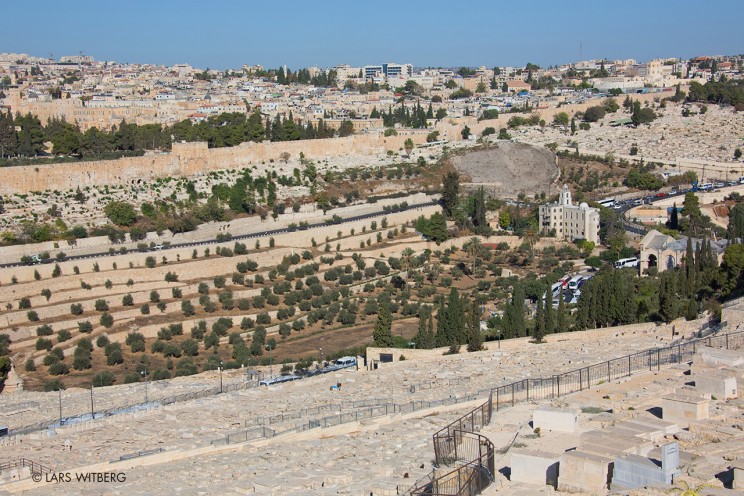 Below us to the right you can also see the Garden of Gethsemane. In old Hebrew “Gat Shmanim” means Olive Press and that is what it was and still is – a small garden of olive trees and a house with an Olive Press. This is where Jesus went to pray after the last supper and was later arrested after the betrayal of Judas. It is here that Peter tried to defend Jesus with a sword and cut off an ear of one of the arresting soldiers. As you may remember Jesus stopped this and healed the ear of the soldier before being arrested with the words; “this is your hour, when darkness reigns”.

Today you can still walk around a garden of olive trees and try to imagine what it must have been like. Some say the trees here are old enough to have been there at the time. 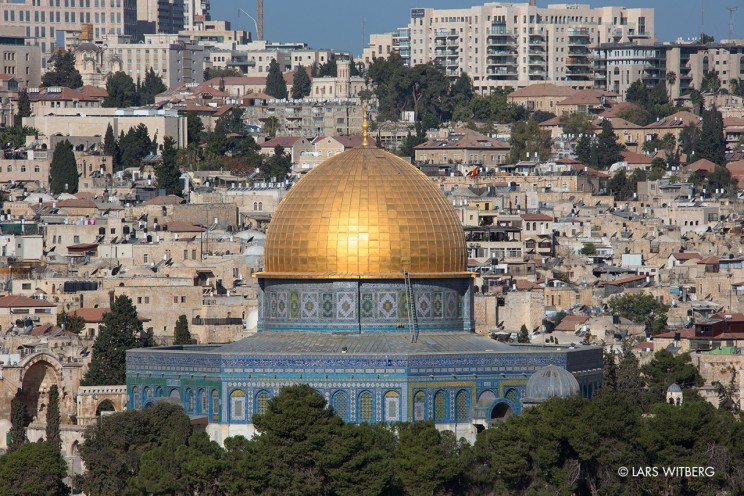 This whole area is regarded as a Holy site for all faiths – Jewish (arrival of the Messiah) and Christian (entrance of Jesus on Palm Sunday) and Muslim (site of future resurrection). Every square feet of this place is described in the most sold books in human history. It is estimated over 4 billion bibles sold since Gutenbergs first print and the number is probably higher. Then you can add the Koran and you have billions of people connected to this place in some way. 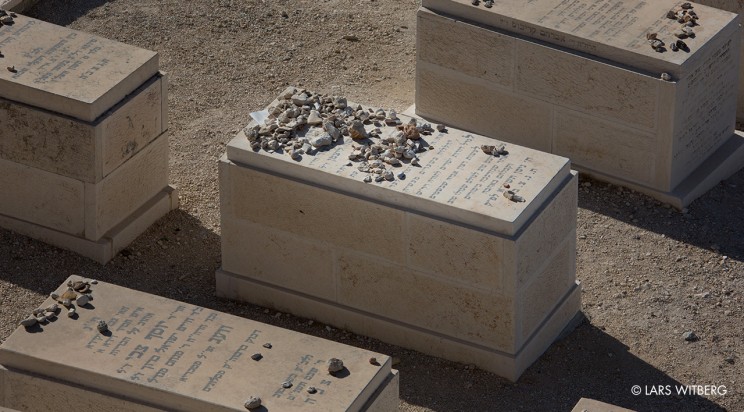 If you believe or not, is not really relevant, this place is just very special to visit and it is such a big part of the majority of the worlds societies. The whole experience is extremely fascinating.

Be the first to comment on "When Darkness Reigns" 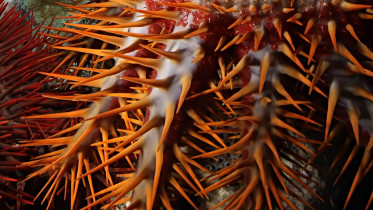 This beautiful multiarmed starfish is called Crown of Thorns and it was picked up and destroyed only seconds after the picture was taken. The…