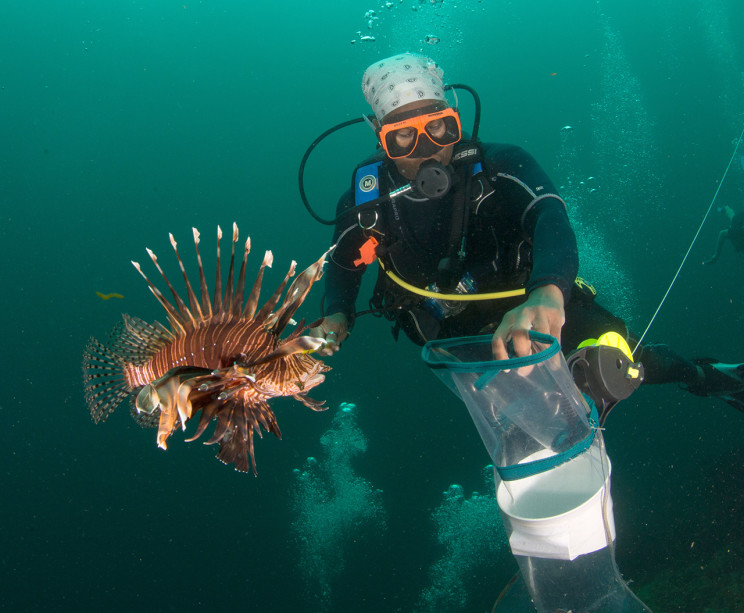 I remember how excited we where the first time. We swam around a giant “shab”, a coral rock in the Egyptian Red sea, and there they where. Suspended in mid water, two giant Lion Fish. The spectacular colors and spiky fins displayed like fans in every direction. We carefully tried to get close with the camera. It was a rare sight. We had read about them in books and heard all the stories about the poison in their dorsal fins and illusive behavior. The pictures got so much attention when we came back. In a way they represented the amazing beauty of the underwater world.

But this was 20 years ago. Today the story is very different. The Lion Fish is widely distributed in south pacific waters. This is their natural habitat where they have food and predators. In this environment the Lion Fish seems to have a healthy controlled population. But like so many other stories, humans interfere with nature and species are introduced to other environments with dramatic results.

First sighting of a lionfish in US waters was around 1985 and it has been one of the most rapid marine invasions of any specie in history. Different stories circulates about how they where introduced and it varies from water from large ships travelling the world, hobbyists introducing species to accidental escapes from captivity. One known fack is that during hurricane Andrew in 1992 a giant beachside aquarium broke and at least six lionfish escaped into the Biscayne Bay.

Today it has spread all over the Caribbean, Mexico and South East US. Juvenile Lion Fish has been sighted as far north as Rohde Island, NY. This invasion is dramatic and causes a shift in the entire ecosystem. The Lion Fish have no natural enemy in these waters and prey on several other juvenile fishes. The negative effect on other species is dramatic.

Most scientists agree, it is unlikely that the lionfish’s invasion of U.S. waters can be reversed. Any large-scale attempt is costly and impractical – so it is opened for extensive fishing. If you can’t beat them – eat them! 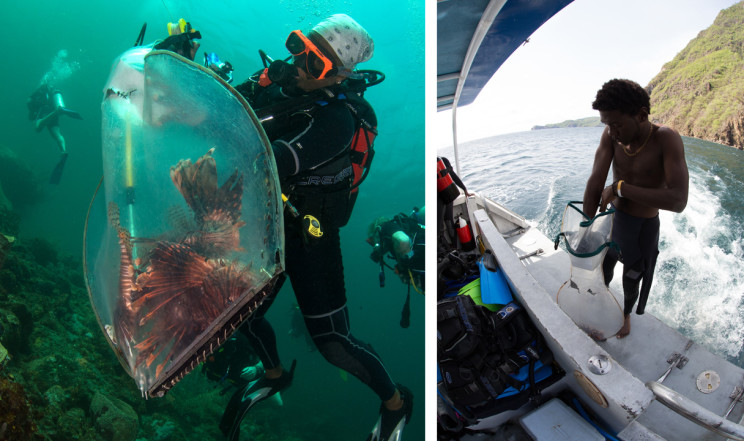 I am on St Lucia in the Caribbean. The dive guide prepares for diving. She takes out a spear and a special designed bag. Then she goes through the dive briefing and she explains about the invasive creatures and urge everybody to help her spot them. Our dive boat floats just between the majestic Pitons, the famous volcanic mountain landmarks of St Lucia. She explains how they now hunt them in large numbers and use as food. Some local fishermen have also found ways to lure them into traps originally designed for lobsters. Today’s catch will find the way to fish markets on the island and maybe be end up at our dinner table in the hotel.

It is 20 years since I first saw a Lion Fish and now we will hunt them as a dangerous epidemic. It is a strange feeling, but I jump in the water with the same hunting equipment as always – a giant camera and an open mind. I hunt pictures and stories. 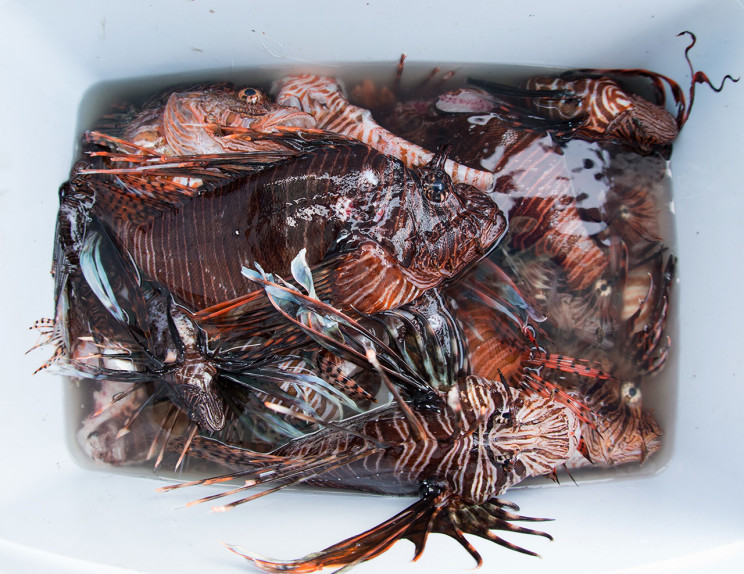 We saw lots of large Lion Fish in deepter water on Curacao when diving in a research sub. Read the article from Curacao

You can follow the development of this invasion here

These colorful tree-shaped tube-dwelling worms live in most tropical reefs around the world. They are called Christmas Tree Worms. They live inside the reef and…

Don’t talk about this