We are in the southeast part of Africa, in Niassa National Park, Mozambique. Not too far from the border of Tanzania. Our young pilot are flying us safely into the wilderness with a handheld GPS. Looking out of the windows of the small plane we see no roads, no houses and no people – only endless wilderness of forest and rivers. I love this! The wilder the better! After a while a larger river appear in the distance. The sunlight sparkles in the flowing water in the middle of the dark green forest. When getting closer, it opens up and we see huge riverbanks, rapids around rocks and animals everywhere. It is the magnificent Lugenda River. This is where we will stay for a few days. We follow the river upstream, passing over groups of elephants and hippos, before we find our primitive airstrip in the forest. The pilot makes a low pass over the landing area to scare away animals, before going in for landing. We touch down and after a few minutes of rough shaking the plane comes to a stop. Doors open and the small cockpit fills with warm, fresh air and the wonderful smell of forest.

An open car takes us from the plane to the tent camp by the river. Before they drop us off in our tents they give us a very important warning. “Don’t leave your tent for any reason! Every step you walk in this camp must be with a guard carrying a gun. This camp is in the middle of the forest and wild animals of every kind are passing through, day and night.” He goes on “Next to your bed is a compressor horn in case of emergency. If you feel threatened, you blow the horn and we will come running”. 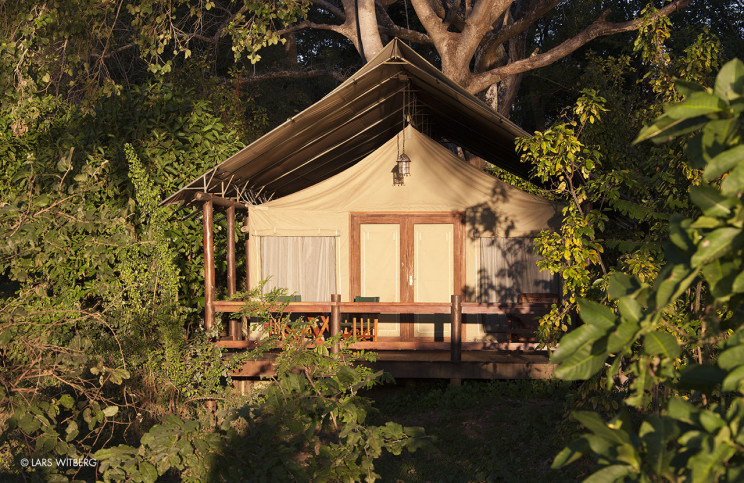 We drop our gear in our tents and start preparing the photo equipment. It is hot inside. A monkey with a child is looking at me through the thin net window from the outside and a small gecko is running on the inside of he tent. The sound of the river, the wind in the trees and insects makes an intense noise. I am sweating and I can feel the excitement for the next few days…and nights. I finish the photo preparation and wait for a guard to pick me up and take us to the open car. 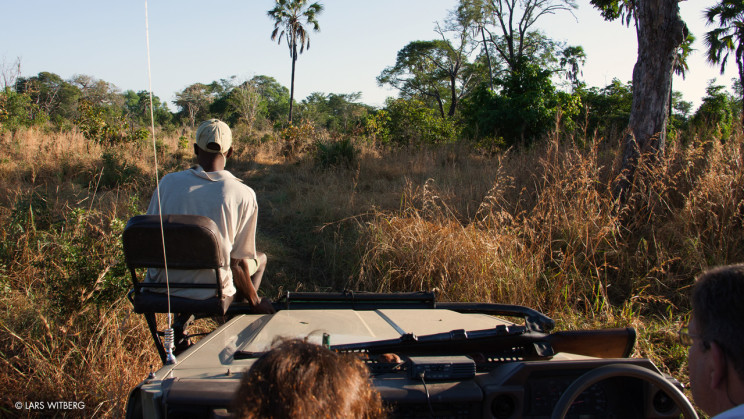 If you ever take someone on a road trip with a car and want to create extra expectations, these guys had a nice trick. They always loaded a big rifle, “locked and loaded”, and then put it in a quick release stand on the dashboard before starting the car. It really worked.

Today we are hunting for one of the world’s most endangered mammals – the African Wild Dog. The gun in the car is only for emergency, we hunt with long camera lenses, passion for wildlife and a great deal of patience.

The Niassa National reserve is covering over 42,000 square kilometers and it is among the largest national parks in Africa. It was founded in 1954 while Mozambique was still Portuguese. Niassa did not receive effective protection until the end of the Mozambican Civil War with the signing of the Rome General Peace Accords. Since then, the Mozambican government has set up management systems in order to protect the ecology of northern Mozambique. The relative isolation and lack of development that protects the park also hurts its potential for tourism. It is very remote and getting in here is not always easy. This small tent camp is one of very few places to come if you want to explore this massive wilderness.

Here we can find the largest remaining population of Wild Dogs – if we are lucky.

Wild dogs are social and gather in packs of around 10-15 individuals. They are opportunistic predators and hunt medium sized impala and gazelles. They can reach speeds of 44 miles per hour and are one of the most efficient hunters in Africa – targeted prey rarely escapes. It is estimated only 3000-5500 individuals left in the wild and the number is decreasing. Major threats to the survival of wild dogs include accidental and targeted killings by humans, viral diseases like rabies and distemper, habitat loss and competition with larger predators like lions. In large wild parks like this they are trying to protect the few remaining animals, but especially the wild dogs move in such a large areas it is difficult to prevent them from getting in conflict with people in surrounding villages. 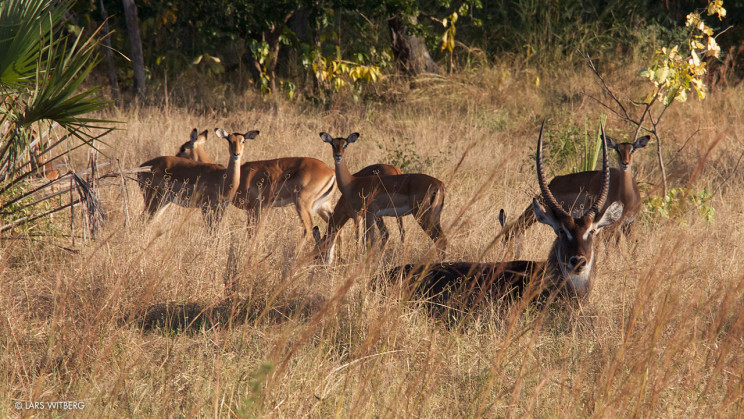 A pack of 15 dogs had been spotted a few weeks earlier. Their high speed and efficient hunting makes them move over large distances each day and becomes difficult to track.

We are in the car and it is early in the morning. The air is almost a bit chilly and the seats in the open jeep are still moist from the night. The sky is blue and another dry and hot day is about to commence. Before we leave, a local guide take a seat in a special chair mounted in front of the car. From this position he can easier spot wildlife and see the fresh paw tracks in the light sand. He exchanges a few words in Portuguese with the driver and the engine starts.

We drive on narrow tracks of sand in thick, tall grass and dense forest. It is animals all along the road. Mostly Impalas, baboons and large flocks of birds. Suddenly a wild boar runs across the road and we can hear the sound of hyenas.

The guide makes a hand signal to stop the car. We stop in the middle of an area with tall grass. Taller than the car and the field of view is very limited. He lookes intensely out to our left side. From our position it is impossible to see anything. He slowly steps down from his exposed outside seat and with his eyes locked at something out in the grass; he climbs in the back where we are sitting. He whispers something in Portuguese to the driver and we start moving again. He says “it was something big” but can not say what, then he smiles and say: “It is just a good survival instinct out here to be extra cautious”. 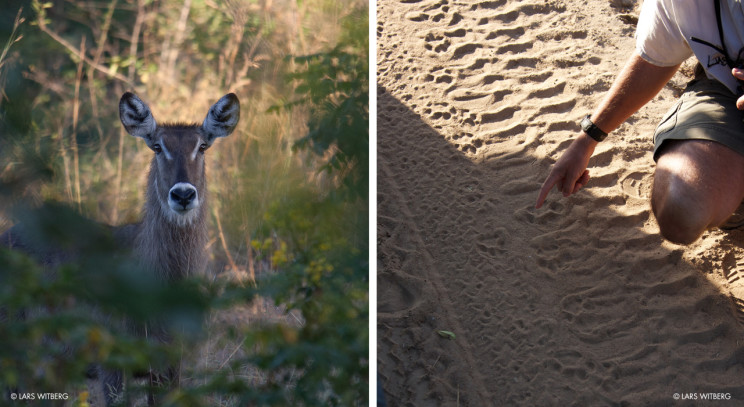 We drive a little further and stop. He climbs out and kneel in the road. Paw tracks. He can tell what kind of animals, number of individuals, size and how long ago since they passed. It is amazing. To him it is like reading a newspaper. After a few stops like this we started to see Wild Dog Tracks. 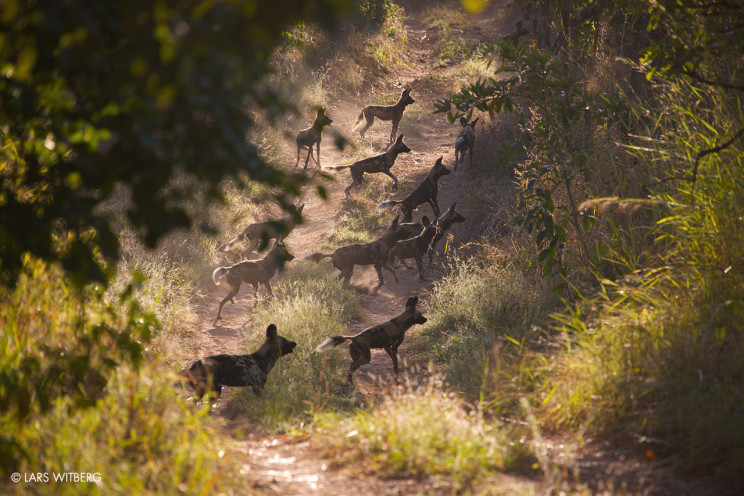 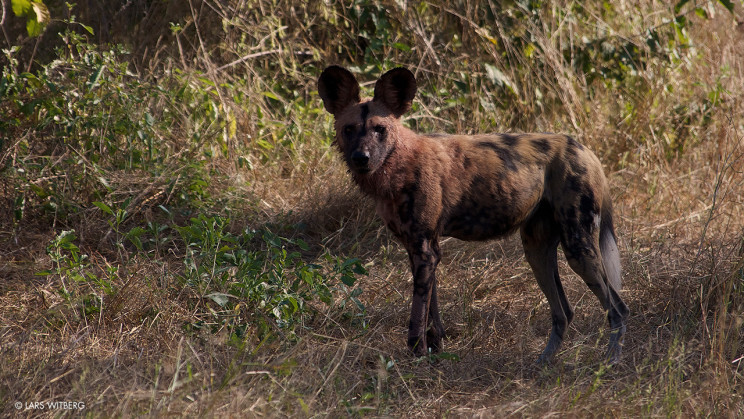 Then suddenly, on the road ahead, a large group of Wild Dogs. Only 50 yards ahead. They are clearly startled by something in the forest. They jump up and down and are very edgy. Then they take off in high speed. We loose them for a while. Then we try to follow but the car have to move along open areas. We circled for a while and then we found them again. We just saw bloody heads sticking up from the brown grass. They had just killed an Impala and were busy eating. We came quite close with the car and could watch them eat the whole animal. It took less then 20 minutes. Then they took off again and we lost them. In our short meeting we got a sense of their speed and efficiency. 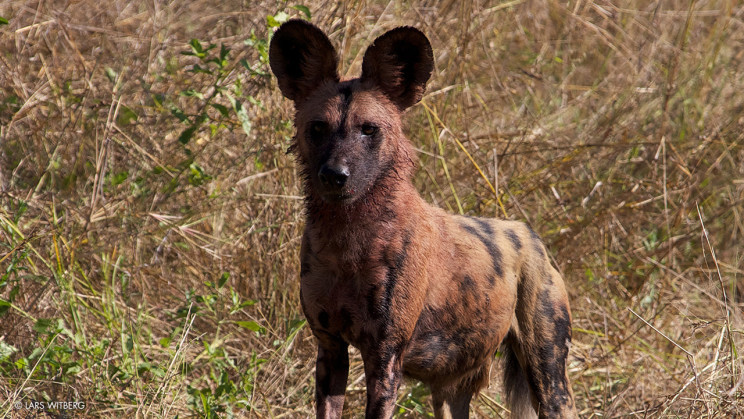 We headed back to camp for a mid day rest and maybe a ice cold gin tonic. Tonight we are going out for more.

Read about the Mountain Gorillas of Uganda: http://reflections.no/remember-no-loud-noises-and-no-eye-contact/

Be the first to comment on "African Wild Dogs" 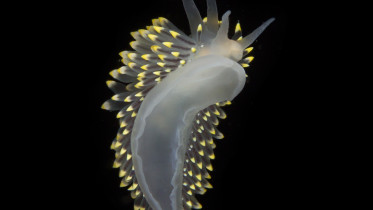 My hands are so cold. At 70 feet under the surface the pressure makes my thick gloves so much thinner and the insulation effect is…